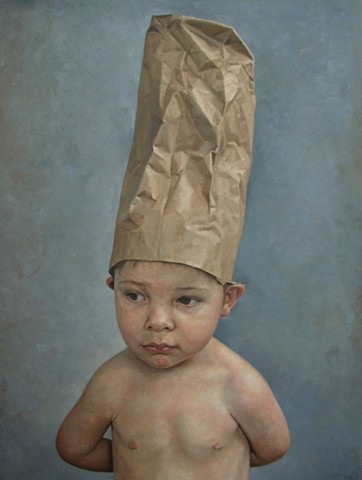 News: An exhibition of portraits - Beyond Likeness - a two person show with Robert Anderson at Dedee Shattuck Gallery

Two pieces will be included in A Concentration Of Power - an exhibition curated by Alexander Gorlizki at Joost van den Bergh in London.

Hertling Collaboration - Fall 2018 Borowicz has partnered with fine clothing manufacturer Hertling to create trousers based on one of the artist's paintings. Hertling, founded in Brooklyn in 1925, continuously elevates style through beautifully handcrafted products.

Borowicz's portrait of Nikki has been selected for the 2017 BP Portrait Award Exhibition. The portrait will be included in the exhibition at the National Portrait Gallery in London from 22 June – 24 September 2017. The exhibition will then go on tour to Exeter City Art Gallery (4 October – 4 December, 2017), Scottish National Portrait Gallery, Edinburgh (w/c 11 December, 2017 – w/c 19 March, 2018) and Sunderland Museum and Winter Gardens (w/c 26 March – w/c 11 June, 2018).

John Borowicz's portrait "Abby" has been chosen as a finalist in the Portrait Society of America's 2017 International Portrait Competition. There were 23 finalists chosen from 2,179 entries. The works will be on display at the Art of The Portrait Conference, April 20 -23 in Atlanta, Georgia at the Grand Hyatt Buckhead.

Borowicz's portrait of his son Tad is on the move again. After the BP Portrait Award Exhibition closes at the Scottish National Portrait Gallery later this month (26 March) the exhibition will then tour to Firstsite Gallery in Colchester, Essex. The show will open at Firstsite on the 7 April and close on the 18 June 2017. All of the tour dates can be found on the National Portrait Gallery website here: BP Portrait Award Tour Firstsite Gallery

John Borowicz's portrait of "Nikki" has placed in the top ten in the Portrait Society of America's Members Competition.

The Upcoming review of BP Portrait Exhibition at The National Portrait Gallery in London: ...Now in its 37th year, the BP Portrait Award not only represents a range of countries, but also a variety of painting techniques: from strikingly realistic works that almost seem like photographs to expressive brush works, almost every genre of painting is represented. Equally diverse is the range of subjects – from family members and friends to prominent personalities, the range is overwhelming. John Borowicz’s Tad (Son of the Artist), for example, depicts the heartwarming moment when his young son pulled a large brown paper bag on his head, while Charles Moxon more soberly portrays MP Harriet Harman in a Renaissance-style full-head portrait...

Blouin Art Info. review of BP Portrait Award Exhibition at The National Portrait Gallery in London - ...Other highlights are works that also take their inspiration from art history. “Die Vermutung I” by Wolfgang Kessler, for example, features a young girl in a shawl like Holbein-era royal portraits; John Borowicz’s “Tad (Son of the Artist)” is similar, but strips the images of their imperial trappings, replacing the robes and crown with his topless son wearing a paper hat. uk.blouinartinfo.com/news/story/1435358…

Interview with Dania Shihab at One Day You Will Find Me

Previous Group Exhibition - The Question of Drawing is an exhibition at the Ogunquit Museum of American Art being held from July 1 through August 21, 2011.